Here is Where Your Next Adventure Begins...

Born in Bridgeport, Connecticut, by parents of Puerto Rican Decent, DJ Speedy Jr. moved to the Tampa Bay Area at the age of 12 and began to DJ at the age of 15. Following the footsteps of his father the original Speedy,

No music style is out of his range, he mixes everything from; Salsa, Merengue, Reggaeton, Hip Hop, Bachata, International, Freestyle and House, but is recognized and well known as one of the best Reggaeton DJ’s in Florida, and for his Salsa sets. He has been nominated for numerous awards, Latin Mixx (www.latinmixx.com) 2007 and 2009 nominee for Best Down South Latin DJ, 2010 nominee for Best Mixtape and 2007 nominee StreetsMos Latin Awards (http://www.myspace.com/streetsmos) Best Underground Latin DJ. HE IS LATIN MIXX’S (www.latinmixx.com) BEST DOWN SOUTH LATIN DJ FOR 2008 WINNER! He regularly tours nightclubs in Orlando, Ft. Myers, Panama City, Ft Walton Beach and currently you can find him on 92.5 Maxima FM every Saturday 8pm to 10pm Kalle Mix (www.925maxima.com),  Spinning the Tampa Bay’s hottest latin nights.

Come join DJ Speedy Party Adventures as we change the club scene to a destination party scene.  Interested in having speedy host your event and/or DJ your party, contact us and let us make your event the best it can be. 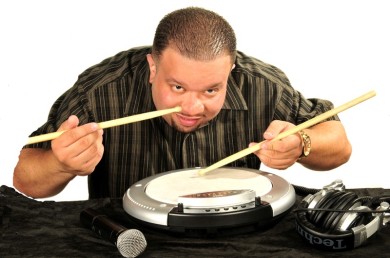 Cesar Ramirez Jr of Prestige Travel and Events is now the Chief Strategic Officer for LaMezcla.com!!